Daily life is about feeding it with the best: worthy + funny stuff, i.e.! Let’s share as much as possible of this with all of our friends and partners, ‘cause:  LIFE IS ABOUT SHARING

THE SOUND OF TIME

STUNNING INTERACTIONS BETWEEN HUMAN VOICE AND ITS PERMANENCE BEYOND LIFE

Nesyamun, Egyptian priest 3000 years ago (by 1100 BC), was playing the scribe role in the famous Karnak temple, and this would be something more or less anecdotal …until scientists of London & York University ‘resuscitating’ his voice nowadays.

An electronic larynx + advanced 3D printing techniques + lot of scientific work and research could reproduce the voice pronouncing a unique vowel, enough to leave everybody in the lab breathless of emotion.  30 centuries after, Nesyamun was ‘talking’ again.

In fact, my pro-scientific rationality is delighted with this news, even if about a year ago, I felt stunned by similar fact in a much smaller span of time (‘just’ some decades) while listening to 2015-produced song ‘Real Love’ from the Beatles …with John Lennon playing his part in ‘all natural’ way together with Paul, George & Ringo!

For a Beatles’ fan like me, this was much more than rationality, of course.  Lot of huge emotions and feelings converged inside me while watching the respective video, kind of an ‘image patchwork’ extremely well mixed, that shows good part of ‘the Big 4’ evolution throughout time.  Yoko Ono was responsible of passing John’s voice packed in a tape to the song producers, and Jeff Lynne did an outstanding work by integrating it together with the other, multiple tracks including real-time voices of the other three members of the band + different instruments, etc.

35 years after John death, he was singing for mankind again, in a piece of art (the song itself) that sounds like almost none of the previous ones, except for a small few.  ‘Best for the end’ seemed the formula here.  Same miracle happened with a fellow song, ‘Free as a Bird’, that was cloning processes and production time.

Art and science moving forward in similar way, discussing time’s dictatorship for the benefit of every thirsty mind and attentive ear wanting ‘more’, beyond the everyday thing (my cat’s meow or the transit claxons included 🙂

Thanks science for letting me know that perhaps one day Tutankhamun’s voice can pronounce some ritual pray again, and thanks art for shaking my emotions by evoking the magics I’ve always admired in the Liverpool geniuses.

‘Til the Next one!

A VOLCANIC ISLAND FULL OF SECRETS TO BE YET REVEALED

Only 2 km wide and 150 m high over the Pacific Ocean surface, HTHH (summarized name 🙂) was astonishingly born in 2014 through a volcanic eruption that, coming from below the sea, projected stones, ash, and smoke 9 km up, deviating the aereal traffic for a while.

Enough for capturing your interest? …then wait, ‘cause much more is coming:

ISLAND LONGEVITY: even if this type of (volcanic) islands only last some months over the sea surface, satelital studies on Hunga Tonga… have forecasted up to 30 years to this curious island.

AN INTERPLANETARY LINK: NASA researchers are studying the island because of its incredible similarity to some of Mars regions, in order to better understand the red planet’s volcanic side together with ancient sources of water there.

GEO-MORPHOLOGIC MYSTERY (MUD): as if it was necessary to add unreplied questions, the appearance of a strange mud coming from the volcano cone and inclassifiable until now (only certainty: it’s not volcanic ash) is enriching the enigmatic secrets still to be discovered.

AT LEAST, ONE LOGICAL THING: …in all of the mysterious ‘magma’ (just to conceptually link 🙂) here, is the island name, still unofficial, taken from the neighbour islands Hunga Tonga and Hunga Ha’apai.  Perhaps such an impactant intrigue was deserving bit more of imagination!

Let’s hope the coming times will revealing HTHH secrets and (why not?) discovering new ones!

‘Til the next one,

PERCEPTION … WHY DOES THE 3D THING FASCINATE US REALLY?

Every time that in our courses we ask about WHAT CAME FIRST→ 2D OR 3D as an artistic expression for human beings, the almost sure reply is ‘2D!’

Between 700.000 and 230.000 years ago, our prehistoric ancestors from the Lower Paleolithic were able to polish a rock until shaping it like a woman (Venus of Berekhat Ram) …and of course it was the expectable thing! …as they lived (like us) in a 3D reality, rounded by things with physical volume inside a three-dimensional space, thus being the 3D production from them the natural, logical consequence of this. They projected what they lived.

Long later, about ‘only’ 40.000 years ago, during the Upper Paleolithic period, we find the first examples of paintings, engraved or painted in caves with ochre or black pigments to show mainly animals (horses, rhinoceros, mamooth) and hunting humans …taking initial advantage of the three-dimensional shapes suggested by the cave rocks where they got inspiration.  The 2D means dimensional compression from 3 to only 2 axes, what takes a lot of effort from these primitive brains. The Bhimbetka Rock Shelters are a fantastic example of early painting.

In 1908, Emile Cohl did ‘Fantasmagorie’, the seed and initial source of todays art of animation. It was completely 2D, and took about 700 handmade drawings that, put together in a sequence, were giving as a dynamic result 75 seconds of animated film.  2D first, then, in this (today extremely expanded) art.

In 1910, only two years later, Wladyslaw Starewicz performed ‘The Beautiful Lukanida’ by the impressive (in these early cinema times) technique of stop-motion: giving the impression of static objects moving by displacing them progressively and filming only one frame after each displacement.  3D animation, in other words, with real physical objects.  In more recent times (1972) we find the first computer animated (digital rendering) example: ‘Halftone Animation’ from Ed Catmull and Fred Parke, supported by the University of Utah.

The real boom came to this art with the powerful ones, that normally have the ability to ‘popularize’ their stuff, making it available to high amount of people.

1928 was the 2D year of ‘SteamBoat’ (Mickey Mouse, Disney), and 1995 the 3D year of ‘Toy Story’ (Pixar): almost 7 decades of distance between the irruption of both types of animation for the cinema-addicted masses.

From AR (Augmented Reality) headsets, Holograms, and more from the ‘impression of 3D’ to the real-3D thing coming from (i.e.) 3D-Printers, we enjoy today a huge variety of possibilities to get in contact with the three dimensions, besides the natural living experience.

NASA creates habitats for Mars in 3D printers, together with Bradley University, MIT (Massachusetts Institute of Technology) prints ‘living tattoos’ with ink made from genetically programmed bacteria cells, Australian researchers made a 3D-printed ‘clip-on’ that turns a smartphone into a microscope, and the ICL (Imperial College London) can replicate human organs through 3D-printing techniques …even human biological structures in 3D!

A MATTER OF (CONSCIOUS AND UNCONSCIOUS) GOALS

FUN (with ‘F’ of fascination) is a nice way to explain our interest towards any kind of artistic expression that comes to entertain, and to enrich our perception of the world in which we live. Anahlyph Images, Cinema, Sculpture, Holographic creations, three-dimensional prints, are a way of re-creation of what we conceive as the spatial reality we live in.  3D objects, characters, creations, confirm and discuss at the same time the ‘dominance’ of a ‘unique real reality’. 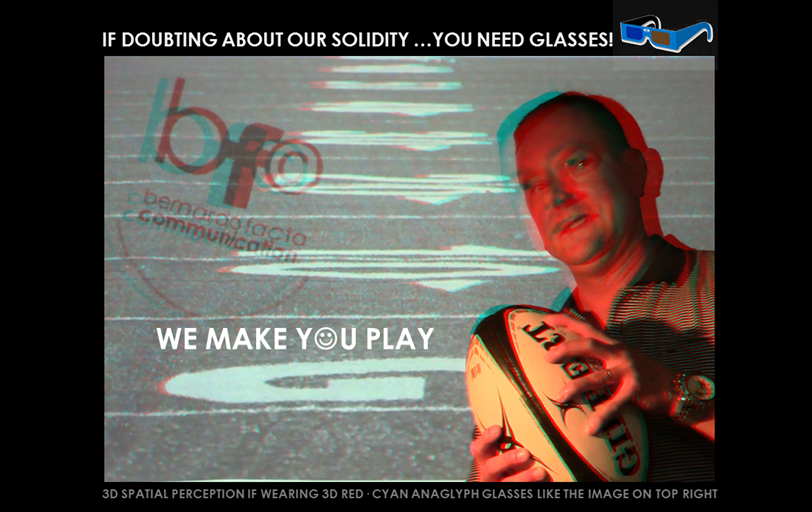 EGO is another, so powerful reason why we human beings have always wanted to replicate ourselves outside us, in caves, cinema screens, art galleries and museums, or our office/ home.  And is also, according to Prof. Mark Changizi, the reason why we usually prefer 3D cinema films to living theater: every member of the public is completely ‘targeted’ by the film, instead of the few ones chosen by actors in some typical theater shows.

POWER comes hand-to-hand with the previous concept, as an artist (‘cause I can re-create reality with my hands and talent’), as an engineer (‘cause I can solve a deep human need through my design on a 3D-printer’), as the perceiver of artworks or the user of the 3D-printed tools (‘cause somebody had to create this for ME, and I decide if liking it or not’), etc.

By progressive addition of stimuli, cinema is showing us the never-ending story of ‘I want more’:  by adding a 2nd projector in real time, we come from 2D to 3D … by adding some physical action (vibration, shake, etc.) we reach 4D …if we expand even more the experience throuth (i.e.) some smell or special climatic effects (wind, snow), welcome the 5D …when interacting with the film (i.e. by killing the characters with a toy gun in our hand), 7D is there …and if able to be ‘part of the experience from inside it’ we speak about the newest, 9D way of interactive cinema, in which we have 360º perception, through immersive glasses and a ‘projected virtual reality’ coming from powerful design.

You can interact with humanoid robots!  Or witness how (according to J.L. Cordeiro) we can expect to put human consciousness into a chip so soon…

And after all of this having been said, the human limits are always there remembering that to create something like the universe is only for who/what has created it (and seems to keep on growing the idea day after day).

Our human attempts to add dimensions to our creations is healthy, evolutionary, and even necessary, anyway.

Hope you liked this …in any case, you can tell us your opinion IN REAL-3D BY SHARING A COFFEE WITH US!

While Neil Armstrong and ‘Buzz’ Aldrin (Apollo 11) were on the Moon surface, few kilometers away from their lunar module the Soviet Lunik 15 was hitting …the same surface!  An unmanned mission, the robotic craft caused alarm in both American astronauts by altering the seismographic info in their sensors.

Wild competitors challenging each other to make science go always further.  As a NASA personality recently said: ‘without the Russians as contenders, we could have never reached the moon’.

Have you ever suffered burns? Fire, boiling water, and many other possibilities of undergoing accidents with burns, need a solution.

We need eggs! Beyond the courage to endure the pain, what we need is (immediately after the burn) to cover the affected area with egg white.

Being an air insulator, it reduces pain to almost ‘zero’. Being an epithelizing substance, it prevents blisters and rebuilds the skin.

What else can we want?  Not to get burned, of course 🙂

Thanks to this advice that in my youth gave me Dr. Ricardo Belloc, a biochemist neighbor we had in our weekend house, I could do the ‘miracle’ in the skin of my daughter when she was a baby (boiling water, in her case) and with my +90 y.o. grandmother when she got burned with a meal (also boiling) spilled on her hand.   The skin of both was healthy intact the day after!

I wish you never need this trick, although it’s always good to know 🙂

Note: only the egg white should be applied onto the affected area, and you can repeat the process once or twice (once the last layer gets dry, i.e.).